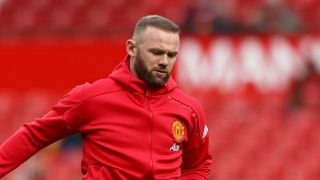 Wayne Rooney will hope that a return to boyhood club Everton can prove a catalyst for a return to the sort of form that made him one of world football's most fearsome strikers.

But in recent seasons Rooney has found himself increasingly marginalised and was only a bit-part player under Jose Mourinho, while he was ushered out of Gareth Southgate's most recent England squad.

Rooney was arguably at his most dangerous in the 2011-12 season, scoring a career-best 27 Premier League goals, but the following campaign saw a dramatic drop in his productivity. Rooney scored just 12 times in the league as he played a supporting role for Robin van Persie, who struck 26 times to fire United to the title after joining from Arsenal. Rooney also contributed 10 assists, but his goalscoring return was disappointing for a player of his calibre and was below that of Swansea City's Michu and Aston Villa's Christian Benteke.

With Van Persie sidelined for much of the season due to injury, Rooney led United's goalscoring charts with 17, but the club struggled after the retirement of legendary manager Alex Ferguson. Rooney had clashed with David Moyes at Everton and, although the duo patched up their relationship, Rooney's goals saw United finish only seventh in the table. Rooney managed 10 assists again, but three Premier League players - Yaya Toure and Liverpool pair Luis Suarez and Daniel Sturridge - outscored him.

Louis van Gaal was the new man in the Old Trafford dugout following Moyes' dismissal and United improved enough to finish fourth, with Rooney again the club's top goalscorer. Van Gaal's tactics frustrated fans and players alike, with Rooney scoring 12 goals compared to 10 for Van Persie. The 2014-15 season saw the emergence of a hot new talent - Tottenham's Harry Kane - who hit 21 Premier League goals in a breakthrough campaign, while Chelsea won the title thanks largely to Diego Costa's return of 20.

Rooney's numbers were on the wane again during the 2015-16 season as Van Gaal's side scored just 49 goals, finishing fifth in the Premier League and missing out on Champions League qualification. Rooney hit the net just eight times, with Anthony Martial ending the season as United's top scorer after contributing 11 goals. Rooney was no longer matching the numbers of the elite strikers in the league, with Kane and Sergio Aguero both hitting over 20 goals for the second season in a row, while Jamie Vardy scored 24 goals as Leicester City shocked the football world to win the league.

Last season saw Rooney decline further as his previously undisputed starting spot for club and country was lost. Mourinho was unable to find a spot for him in his United side and Rooney managed just five goals, although he did become the top goalscorer in the history of the club with a stunning last-gasp free-kick against Stoke City.

The statistics show a fade in Rooney's goalscoring prowess, particularly when marked against those at the top of the Premier League scoring charts. Kane has hit a stunning 75 league goals over the last three seasons, while Sergio Aguero has contributed 70 for Manchester City in the same period. In contrast, Rooney has scored 21 times in three years - fewer than Alexis Sanchez, Romelu Lukaku, who is Old Trafford bound from Everton, and Kane managed last season alone. Rooney's playmaking has held up, however, the England captain recording 36 assists in the last five seasons.