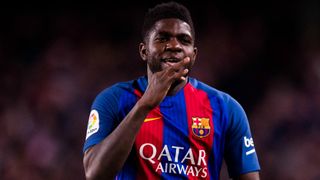 Samuel Umtiti concedes the 3-4-3 formation deployed by Barcelona in recent weeks is leaving them exposed defensively.

Barca first used a three-man defence in last month's victory over Atletico Madrid, but the system has come under scrutiny after the club's last two matches.

Visitors Valencia regularly found space to breach Barca's defence despite their numerical disadvantage and Umtiti admits the formation does have its drawbacks.

"It is true that in this system we are more exposed defensively," he told the club's website.

"We need to know how to find the necessary balance between defence and attack.

"In any case, the most important thing is the victory. I am happy to have been able to achieve this one and to have started, but it is down to the work of the whole team. I hope the run continues.

"When we lost the last game at the Riazor, we knew we had to win this one. Now we are eager for these international games to be over because, after, some very nice things can happen."

Barca's next game is away to Granada on April 2, before Sevilla visit Camp Nou three days later in a crunch clash that sees second in LaLiga take on third.

We have heard that today is the official . We thought it was the day that this happened! March 20, 2017