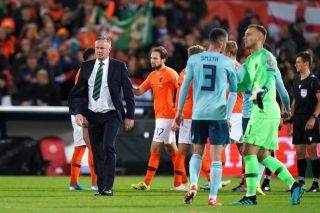 Northern Ireland face the Czech Republic in Prague on Monday night in a friendly.

Here the PA news agency takes a look at five key talking points ahead of the game.

Northern Ireland arrived in the Czech capital still hurting from Thursday’s late defeat to Holland in Rotterdam, where Ronald Koeman’s side scored twice in stoppage time to win 3-1, having fallen behind to Josh Magennis’ 75th-minute header. A win would have been among the greatest results in Northern Ireland’s history, while a draw would have kept open a realistic path to Euro 2020 qualification out of Group C. The eventual defeat simply left Michael O’Neill “devastated”. While this match carries no such importance on paper, a good performance and a result to match would go a long way towards lifting spirits.

There will be keen interest in O’Neill’s team selection for the match. Plenty of changes are expected, with the manager keen to give time on the pitch to several members of his squad who are sorely in need of it. Michael McGovern is expected to start in goal while the likes of Tom Flanagan, Ciaron Brown, Jordan Thompson, Liam Donnelly, Gavin Whyte and Shayne Lavery will hope to see game time. St Johnstone winger Matthew Kennedy could make his debut.

Czechs on a high

While Northern Ireland were floored by Holland’s flurry of late goals in Rotterdam, the hosts come into the game riding high from Friday’s 2-1 home win over England – a first qualifying defeat in 44 games for the Three Lions. It was all the more impressive given they fell behind to a penalty inside the opening five minutes. Like Northern Ireland, plenty of changes are expected to Jaroslav Silhavy’s side, but morale will be high throughout the group.

Goals at a premium?

Northern Ireland fans could be forgiven for spending much of Monday night more concerned with results elsewhere. While their chances of getting out of Group C are not dead yet, the play-offs look a much more realistic possibility for O’Neill’s men if they are to qualify for next summer’s finals, so all eyes now are on how the field begins to shape up. With Northern Ireland ranked 24th in the Nations League rankings, they need no more than four teams from Nations Leagues C and D to secure automatic qualification in order to be sure of their play-off place. Fans will have the play-off simulator on UEFA’s website on constant refresh.