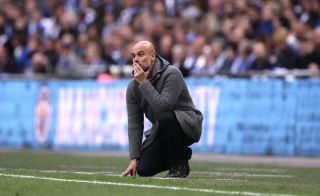 Premier League champions Manchester City will take on Watford in the FA Cup final at Wembley on Saturday.

Pep Guardiola’s side will be out to secure a clean sweep of all three domestic trophies when they face Javi Gracia’s well-drilled team.

Here, Press Association Sport’s Jim van Wijk takes a looks at some of the key talking points ahead of the showpiece fixture.

The battle for the Premier League title proved to be the most exciting in years, as City held off the challenge of Jurgen Klopp’s Liverpool to defend their crown following victory at Brighton on Sunday.

With the two other domestic trophies already in the bag, Pep Guardiola’s men are on the verge of an impressive clean sweep – which might just help ease the pain of their Champions League shortcomings.

However, as the history of the famous old knockout competition shows, take nothing for granted on FA Cup final day.

Deulofeu at the ready

🏌 | Cheeky chip from @gerardeulofeu pulls one back for @WatfordFC!#EmiratesFACuppic.twitter.com/pHDrfZKhlk— The Emirates FA Cup (@EmiratesFACup) April 7, 2019

Spaniard Gerard Deulofeu helped the Hornets produce a remarkable recovery to beat Wolves after extra-time in their semi-final, having been 2-0 down with just 11 minutes to go.

Sent on as a substitute just after the hour, the former Barcelona man produced a brilliant chip to reduce the deficit.

After captain Troy Deeney had equalised from a penalty deep into added time, Deulofeu then completed the turnaround with another composed finish following a swift counter to make it 3-2.

Gracia’s admitted the forward had been “angry” to find himself starting on the bench – and such is the impact Deulofeu can have, City might just be hoping he has used up all of his frustration in helping get the Hornets back to Wembley for the final.

City’s England forward Raheem Sterling has enjoyed a stand-out campaign for both club and country.

Sterling converted the decisive spot-kick as City beat Chelsea on penalties to win the Carabao Cup final in February.

His 17 Premier League goals helped Guardiola’s side secure the title – and another at Wembley could just seal a domestic treble.

“I’m 99 per cent decided that this will be my last season. I’m still feeling like I can go on for a few more years but I’ve got some plans & I believe it’s time now to think about it.” 😦@hdgomes on his past, present & future ⤵https://t.co/sDTlcysMBzpic.twitter.com/4YOzEnyLTZ— Watford Football Club (@WatfordFC) March 14, 2019

Veteran Brazilian goalkeeper Heurelho Gomes is expected to make his final Watford appearance at Wembley, having started all five of the FA Cup ties.

Hornets’ fans might just be praying for some divine intervention to aid the 38-year-old former Tottenham stopper, likely to be playing one last game before hanging up his gloves.

His regular first-team opportunities now limited, Gomes has been contemplating retirement for a while – but will not have to worry about what the future might hold.

“I am prepared,” Gomes said. “I got a call-up from God to be a pastor, so maybe this can happen.”

Should City need any warning of just what can happen when overwhelming favourites run out at Wembley for the FA Cup final, then a quick clip of Watson’s late header for Wigan in 2013 should provide plenty of food for thought.

Roberto Mancini’s men were expected to make light work of a Wigan side who had spent the whole season battling against relegation and eventually went down.

Nothing, though, went according to script as the Latics – who had been led onto the pitch by owner Dave Whelan, a man with his own 1960 FA Cup final story to tell – produced a major upset.

After Pablo Zabaleta had been shown a second yellow card during the closing stages, Wigan eventually made their extra man count in stoppage time when Watson, who had not long recovered from a broken leg, headed home a corner at the near post.

Mancini was sacked a couple of days later, while Championship-bound Wigan went on to play in Europe.