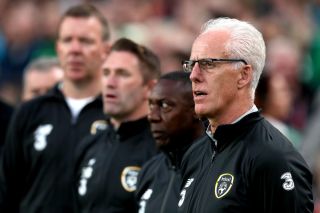 Mick McCarthy will have a first chance to test the depth of his squad as the Republic of Ireland head into friendly battle with Bulgaria on Tuesday evening.

The five games Ireland have played since McCarthy’s return to the manager’s hot-seat have all been Euro 2020 qualifiers – and he remains unbeaten.

Here, the PA news agency takes a look at some of the talking points surrounding his first friendly.

Given what has been at stake, McCarthy has stuck to what he knows during the qualifying campaign to date with nine men – Darren Randolph, Seamus Coleman, Shane Duffy, Richard Keogh, Enda Stevens, Conor Hourihane, Jeff Hendrick, James McClean and David McGoldrick – having started all five games. That policy has proved effective with his team claiming 11 of the 15 points on offer, but he could use the Bulgaria friendly to see a little more of the likes of Mark Travers, John Egan, Alan Judge, Alan Browne and Scott Hogan.

Should McCarthy choose to dig deep into his pool of players, there could be a first cap for exciting prospect Josh Cullen. The 23-year-old holding midfielder is currently on loan at Charlton from West Ham having helped Lee Bowyer’s men win promotion to the Sky Bet Championship in last season’s League One play-off final and is pushing for a maiden senior appearance for his country.

Throwing off the shackles

While the Republic have once again demonstrated an impressive resilience to secure draws against both Denmark and Switzerland with late equalisers, their critics have bemoaned a lack of creativity in their play. McCarthy has repeatedly insisted that it is results rather than style which count, although he admits he would like to take a more expansive approach if at all possible, and that could be good news for the likes of Judge, Callum O’Dowda and Shamrock Rovers’ Jack Byrne as they attempt to force their way into the manager’s future plans.

JC: "My family are flying out and hopefully they'll see me get my first cap."🇮🇪#COYBIG#IRLBULpic.twitter.com/r2pwI9wFKN— FAIreland ⚽️🇮🇪 (@FAIreland) September 8, 2019

Ireland went into the Switzerland game last Thursday evening with none of their four strikers – David McGoldrick, Callum Robinson, Hogan or James Collins – having scored a senior international goal. McGoldrick, winning his 11th cap, promptly ended his wait with an 85th-minute header, but both he and Robinson have since withdrawn through injury to leave McCarthy with only Stoke’s on-loan Aston Villa frontman Hogan and Luton striker Collins at his disposal.

A betting man might put his money on 1-1, the result in the last three games between the sides. Valeri Bojinov cancelled out Andy Reid’s opener to clinch a friendly draw at Lansdowne Road in August 2004, while a Kevin Kilbane own goal handed the Bulgarians a share of the spoils in a World Cup qualifier in Dublin in March 2009. The Republic led 1-0 in the return in Sofia three months later courtesy of Richard Dunne’s first-half effort, but Dimitar Telkiyski levelled within five minutes to take the game into familiar territory.