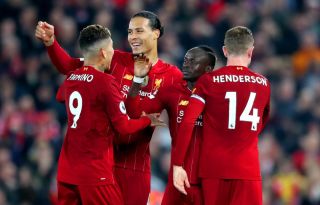 The first Premier League winter break will be split over two weekends, giving players, managers and fans some time to recharge their batteries for the run-in.

While most of Liverpool’s squad have used the opportunity to get away for some warm-weather relaxation, it will have been business as usual for the eight teams involved this weekend.

Here, the PA news agency takes a look at some of the talking points across the latest round of Premier League fixtures.

Fun in the sun

Despite the debate raging back home over whether Liverpool boss Jurgen Klopp should have been at Anfield for the midweek FA Cup fourth-round win over Shrewsbury, the majority of the Reds’ first-team squad have been making the most of their time off jetting around the globe. Whether it is was Trent Alexander-Arnold watching NBA basketball in Miami, goalkeeper Alisson training with Fluminense back in Brazil or Alex Oxlade-Chamberlain and Virgil Van Dijk having a kick-about in Dubai, everyone who was ‘off work’ seemed to be enjoying themselves. And if anyone did find themselves at a loose end, they could always join James Maddison, Ben Chilwell and Jack Grealish for dinner.

💬 "The mood of the group has been really good, that's the encouraging thing.— Brighton & Hove Albion ⚽️ (@OfficialBHAFC) February 6, 2020

Sun loungers and cocktails will be furthest from anyone’s minds when Brighton host Watford in Saturday’s televised late kick-off. The Seagulls will take heart from the way the team battled back to earn a 3-3 draw at West Ham as they aim to keep some daylight between themselves and the bottom three. Watford, meanwhile, find themselves back in trouble following the bounce under new boss Nigel Pearson – and will be kicking themselves after last week’s late capitulation at home against Everton.

When Carlo Ancelotti arrived at Goodison Park, he inherited a club looking set for their own survival scrap. However, slowly but surely the Italian former Chelsea boss has the team moving forward again and unbeaten in the four league games since losing their FA Cup third-round tie at Liverpool. Victory over an out-of-form Crystal Palace side would push Everton closer to the top six – and leave the Eagles, who have not won since Boxing Day, glancing over their shoulder.

Can resurgent Cherries blunt the Blades?

EH: "I don't think anything has necessarily changed. We won the game against Brighton, it was a key game. It was a battling performance, a performance full of heart.— AFC Bournemouth (@afcbournemouth) February 7, 2020

When Sheffield United opened the Premier League campaign at Bournemouth, few would have predicted the fortunes of both clubs some six months down the line. Chris Wilder’s well-organised side could end the weekend in fifth – but the Cherries head to Bramall Lane with a point to prove after back-to-back Premier League wins lifted them out of the relegation zone.

A late capitulation against Brighton at the London Stadium last weekend left West Ham still stuck in the bottom three – with more questions over the direction of the club. Co-owner David Gold has insisted the Hammers are “moving upwards” despite their current poor form. Heading to Manchester City on Sunday is hardly the ideal place to go in search of a first league win since New Year’s Day – but with Raheem Sterling sidelined by a hamstring problem, it is always the hope which gets you.