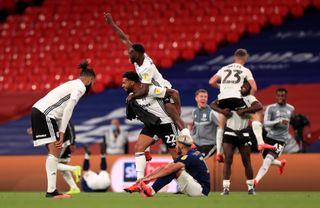 Fulham are back in the Premier League after beating Brentford 2-1 after extra-time in the Championship play-off final at Wembley.

Here, the PA news agency looks at five key tasks for the Cottagers ahead of the new season.

Get more from Mitro

Aleksandar Mitrovic’s 26 goals have fired Fulham back to the top flight, but the Serbia international needs to prove he can cut it with the best. He found the net just 11 times in the 2018/19 campaign, when the Cottagers finished 19th in the Premier League.

Midfielder Tom Cairney was Fulham’s next highest goalscorer with eight. Boss Scott Parker needs another striker to both give support to Mitrovic and ease some of the pressure on him. A proven Premier League forward will be a priority.

Fulham’s calamitous defending was the chief reason they were relegated last time around. They managed only four clean sheets all season, and three of those came after they had been consigned to the drop. Goalkeeper Marek Rodak and defender Michael Hector helped shore things up this season and a few more shut-outs are a must.

I’m delighted to announce that @FulhamFC has signed midfielder Jean-Michael Seri from Nice. He’s been at the very top of our target list for a long time. This is a big day for Fulham. We’re ecstatic that Jean-Michael is joining our squad as we return home to the @premierleague! pic.twitter.com/YdHRd6olzl— Tony Khan (@TonyKhan) July 12, 2018

A scattergun transfer policy following promotion last time around cost Fulham £100million and somehow left them with a far worse team. Jean Michael Seri and Andre Anguissa were among the expensive flops which proved throwing money around does not always pay dividends. Shrewder recruitment is needed this time around.

Craven Cottage will have only three sides with work ongoing to develop the Riverside stand, which will be ready in time for the season after next. Owner Shahid Khan says it will be a “game changer” and will be desperate for Fulham to be a Premier League club when it opens.