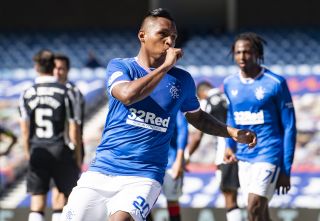 Rangers maintained their early pace as they joined Hibernian and Ross County at the top of the Scottish Premiership – but there was a slip up for Celtic at Rugby Park.

Here, the PA news agency looks at five things we learned from the second week of the new league campaign.

Celtic were first to blink in the title race with only credible rivals Rangers after a 1-1 draw at Kilmarnock. It looked good for Celtic in the second Premiership fixture of the season when midfielder Ryan Christie opened the scoring for the champions with a free-kick from distance after 10 minutes. However, veteran winger Chris Burke levelled in the 24th minute from a penalty and a disciplined, well-organised Killie side held out for a deserved draw to leave Celtic two points behind Hibernian, Rangers and Ross County although there is a long, long way to go.

Alfredo Morelos off and running at last

To say the Rangers striker has had a troubled 2020 is an understatement. His sole goal this calendar year before facing St Mirren on Sunday had come in a Scottish Cup win over Hamilton back in February. But he finally got off the mark in the league with a second-half double as he sent Rangers on their way to a 3-0 win over the Buddies. Steven Gerrard admitted the Colombian’s head had been “turned” by interest from Lille in midweek but he looked more like his old self against Jim Goodwin’s men.

Kevin Nisbet is ready for the step up

Hibernian’s summer signing only got six substitute appearances in the top flight before being released by Partick Thistle two years ago but he has since been prolific for Raith Rovers and Dunfermline. And he carried on in the same vein by hitting a hat-trick in a 4-1 victory over Livingston in his second game for Hibs.

The Scotland striker’s 28 goals were crucial last season as United returned to the top flight and he was missing with an ankle knock as Micky Mellon’s side travelled to Fir Park. United didn’t need him, though. Louis Appere led the line well and Mark Reynolds hit the only goal. But it was United’s organisation that really impressed as they restricted Motherwell to few chances.

Stephen Robinson is looking for the right combination up front

The Motherwell boss has plenty of options for his front three. With Callum Lang suspended, he opted for Christopher Long, Jake Hastie and Sherwin Seedorf up front. The latter impressed again at times but, for the second game running, Hastie struggled to make any impact and Long passed up a chance. Robinson also brought on Jordan White, Tony Watt, Jermaine Hylton and his son, Harry. Picking three from eight might take time.