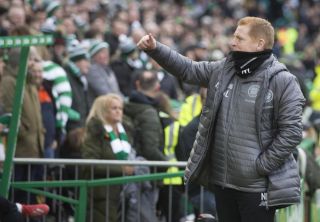 Celtic and Rangers both dropped points while off-the-park issues again hit the headlines.

Here are five things we learned from this weekend’s Ladbrokes Premiership action.

1. Crowd troubles are showing no sign of going away

Six days after a glass bottle flew past Celtic’s Scott Sinclair at Easter Road, a 21-year-old man was arrested after an incident involving Rangers captain James Tavernier on the sidelines at the same stadium during Friday’s 1-1 draw. Hibernian chief executive Leeann Dempster admitted no sanctions were off the table as she observed that statements on websites were having no effect on some fans.

2. Jake Hastie can handle the limelight

The 19-year-old Motherwell winger was heavily linked with a move to Rangers hours before facing the media to collect his Ladbrokes Premiership player of the month award on Friday. But he batted away questions on his future and showed he had not lost his focus by netting his sixth goal in nine matches during a 3-0 win over Hamilton.

3. Celtic players have been affected by Brendan Rodgers’ departure after all

Hoops boss Neil Lennon said as much after a goalless home draw with Aberdeen when he admitted he had expected a lull following their two wins in Edinburgh. Lennon admitted his side lacked “pizzazz”, attributing their flat display to the psychological upheaval of the previous week.

4. St Johnstone’s goalscoring issues could cost them a top-six spot

Saints fell four points adrift of Hibernian in the race for the top six after Tony Watt missed a glorious late chance to level against Livingston before their opponents wrapped up a 3-1 win. Watt has only scored three league goals this season and fellow striker Chris Kane is on one, with their top Premiership scorer, winger Matty Kennedy on five. Saints have scored less goals (29) than all their rivals for a top-six place.

5. Aberdeen have belief ahead of their trip to Ibrox

Dons boss Derek McInnes claimed his side were relishing their Glasgow double header and they showed why as they claimed a point at Parkhead three days before facing Rangers in a William Hill Scottish Cup quarter-final replay. Having already beaten Rangers twice in Glasgow this season, Aberdeen will be quietly confident ahead of Tuesday’s game.