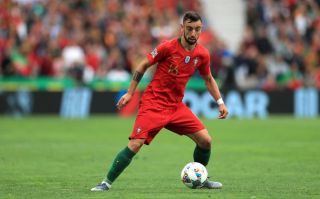 Manchester United have agreed a deal with Sporting Lisbon to sign Bruno Fernandes as their long-running pursuit of the Portugal midfielder nears a conclusion.

United will pay an initial 55 million euros (£46.6million) for the 25-year-old, with a further 10 million euros (£8.5million) dependent on Champions League qualification and appearances by the player.

The pursuit of the Premier League

The midfielder has openly spoken of his desire to move to England to represent a Premier League side. In an interview with GQ in August last year, he said: “It was and is my goal to play in England. Sporting know that, everyone knows that.” That dream was nearly realised during the 2019 summer transfer window when United began their quest to sign him and Tottenham also followed up their interest in the player with several bids, but all were deemed insufficient by Sporting and the move never materialised.

Fernandes raised eyebrows at Serie A side Sampdoria when reportedly demanding the number 10 shirt upon his arrival in 2016. The number had long been associated with club great and current Italy manager Roberto Mancini, leaving the new signing with sizeable boots to fill to justify his insistence that he wear the jersey. Fernandes continued to wear the number 10 when representing his native Portugal in the 2016 Olympics, starting every game until their quarter-final exit and confirming his intent to establish himself in an attacking playmaker role.

Since the beginning of the 2017/18 campaign no Primeira Liga player has bettered Fernandes in terms of goal involvement, with the midfielder having contributed to 67 goals. He is also unbeaten on shots attempted with 271 efforts and shots on target – racking up 114. In addition, Fernandes has scored nine goals from outside the box and created 239 chances across the same time period, again more than any other player in the Portuguese top flight.

Fernandes scored 32 goals across all competitions last season and either contributed to or scored 33 in league matches alone. The latter tally outdoes any other midfielder across Europe’s top leagues, including the likes of the German Bundesliga, the Spanish LaLiga, the Italian Serie A and the English Premier League.

Fernandes was one of several Sporting players that attempted to terminate their own contracts after a group of 50 supporters attacked the squad and vandalised the training ground when the club failed to qualify for the Champions League on the last day of the 2017/18 season. Rui Patricio, William Carvalho, Gelson Martins, Ruben Ribeiro, Bas Dost and Daniel Podence all opted to to join Fernandes in leaving the club. Bruno De Carvalho, Sporting’s president at the time, was later charged with inciting the attack by the Portuguese Public Ministry and ousted from his role. His departure persuaded Fernandes to reverse his attempted rescission and stay put.