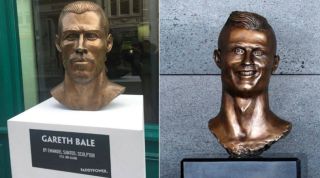 Jeremy Corbyn is very much 'Wenger in', he reveals

The bust is located in Cardiff outside the bookies' shop on St Mary Street.

The Welsh capital hosts the Champions League final on Saturday evening, where Real Madrid will be taking on Juventus.

The bronze bust, which weighs 40kg and is worth an estimated £25,000, took Santos 264 hours to complete. It was cast in Porto and flown 2,300km to Bale’s native Cardiff before being unveiled for the general public's adoration.

Who knows where the bust will be transported next, though – it's only meant to stay outside the shop until Sunday. Got room for it at home, Gareth?