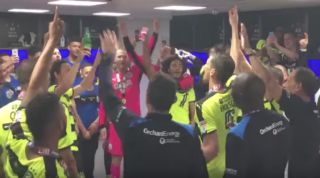 The QPR manager was working as a pundit for Sky Sports at the start of the 2016/17 Championship season and predicted Huddersfield would finish 23rd in the table, just one spot off the bottom.

He said back in August: "I haven't seen much progression from the club during the back end of last season. [Head coach] David Wagner is pretty inexperienced and if results turn, then they may struggle to turn things around."

Well, Huddersfield certainly proved him wrong as they finished the Championship campaign in fifth and won promotion to the Premier League via the play-offs after beating Reading 4-3 on penalties in Monday's final at Wembley Stadium.

The Terriers squad hit back at Holloway by chanting his name in the post-match dressing room celebrations.

David Wagner also had words for Holloway, noting: "By the way, Ian Holloway, all the best for next season. I know a lot of the pundits wrote us off at the start of the season."

Even owner Dean Hoyle got involved. "I've just been in the dressing room, and they're all singing about Ian Holloway," he told the BBC. "I think it is Ian who has driven us on this season!"

We've all been there, Ian.