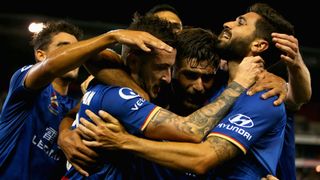 Newcastle Jets beat Melbourne City 3-1 in the A-League on Friday, moving to within six points of the top six and inflicting a third loss in four games on their visitors.

City had been looking in good shape to challenge for a top-two finish this season but their latest defeat adds to poor results against Adelaide United, Sydney FC and Wellington Phoenix, meaning they may start looking over their shoulder.

The Jets were in woeful form around the turn of the year and in early January, losing four from five games, but things are picking up and Friday's win was another impressive result.

Jair got the breakthrough for the home side in the 22nd minute, heading home Johnny Koutroumbis' right-wing cross at the back post.

City were back in it just after the break - Jamie Maclaren racing on to Luke Brattan's pass and coolly slotting home - but two quickfire goals from substitutes in the final 15 minutes saw the Jets power home.

Joe Champness made it 2-1 when picking out the bottom-right corner from 16 yards after good work from Roy O'Donovan on the break, before the two switched roles for the clincher – the Irishman rounding off another devastating counter.

The result sees the Jets end the day two points closer to the top six, as the Phoenix – a place above them – could only draw 1-1 at home to Melbourne Victory in Friday's early kick-off.

Roy Krishna got the Phoenix's goal, emphatically volleying home from close range after a botched clearance, but Keisuke Honda levelled from the spot midway through the second period after a handball.