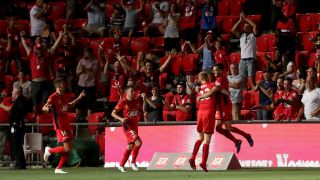 Adelaide United came from 3-0 down to defeat Brisbane Roar 4-3 in a remarkable A-League match that saw three players sent off.

Marco Kurz's side saw a positive start to the match halted when Ken Ilso was controversially sent off after only nine minutes for a foul on Matt McKay.

The visitors took the lead at Coopers Stadium 10 minutes later, with Henrique finishing in style from Adam Taggart's fine throughball, before Dylan Wenzel-Halls doubled the lead with a half-volley.

Taggart scored his 50th A-League from 25 yards out to make it 3-0, but Isaias' fine free-kick gave Adelaide a lifeline before the break.

Brisbane were then reduced to nine men in the space of five minutes, Dane Ingham earning a second yellow card for kicking the ball away and Jamie Young being dismissed for denying Craig Goodwin a clear goalscoring chance.

Goodwin fired home his side's second after the ensuing free-kick was half-cleared, and George Blackwood headed in an equaliser with 15 minutes left.

In the seventh minute of injury time, Nikola Mileusnic nodded in the seventh and final goal, ensuring Adelaide became only the second team to overturn a 3-0 deficit in A-League history.

Melbourne Victory had earlier completed an impressive comeback of their own, fighting from 2-0 down to win 3-2 at Central Coast Mariners.

Andrew Hoole's two fine free-kicks put the Mariners in front, but James Troisi fired in a goal back before goalkeeper Ben Kennedy clawed a Kenny Athiu attempt into his own net.

League leaders Perth Glory had few problems overcoming Wellington Phoenix as they claimed a 3-0 win that ensured a club-record fourth match in a row without conceding.

Shane Lowry and Chris Ikonomidis put them ahead at the break before Andy Keogh's 64th-minute strike, his 50th in the A-League, restored their four-point advantage at the top.