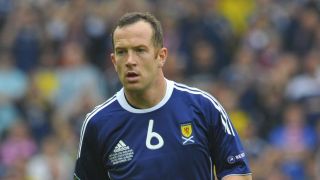 In-form Stoke City midfielder Charlie Adam has been recalled to the Scotland squad for next month's matches against Qatar and Republic of Ireland.

Adam has scored four goals in his last seven Premier League appearances, including one from inside his own half in a 2-1 defeat at Chelsea last month.

His last international appearance came in a 1-0 friendly loss to Poland in March 2014, but his recent showings for Stoke have earned him a recall from manager Gordon Strachan.

Celtic duo Leigh Griffiths and Charlie Mulgrew are also included, the latter having recovered from a hamstring injury, while Griffiths' 13 goals for the Scottish Premier League champions see him given a chance of a first Scotland appearance since September 2013.

There is maiden call-up for Dundee goalkeeper Scott Bain, as Strachan's side look ahead to a friendly with Qatar at Easter Road on June 5, before their Euro 2016 Group D qualifier against Ireland in Dublin eight days later.