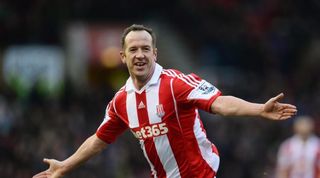 Hughes revealed that the Scot suffered the injury in the build-up to the home clash with Alan Pardew's side, but revealed the former Liverpool man could feature wearing a protective mask.

Fellow-midfielder Stephen Ireland will definitely be available to return after missing last weekend's 3-0 defeat at the hands of Chelsea through illness.

"Stephen is back available to us which is a boost, but also Charlie should be okay as well after an unfortunate incident in training in the build-up to the game," Hughes told Stoke's official website.

"We will have to check up on him between now and kick-off because it was a nasty bang that he received – and in fact broke his nose in a number of different places.

"That is still a bit tender, as to be expected, so we are getting a mask made up for him, which should be with us today ready for him use tomorrow if needs be."

But the game will come too soon for on-loan Liverpool winger Oussama Assaidi, who is close to a comeback after travelling to see a specialist in the Netherlands in an attempt to speed up his recovery from a knee injury that has kept him out since February.

"Ozzie is back over here again now after being checked over by a guy in Holland, and then he needed to go over and see the guys at Liverpool too," Hughes added.

"We are just all frustrated that the final five per cent of his injury hasn't resolved itself yet because we would like to have him available to us.

"He certainly won't be available on Saturday, but hopefully it will be just one more week before we can think of including him in the squad again."