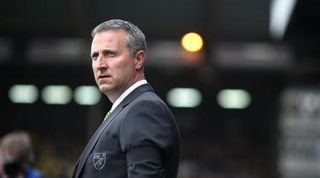 Norwich, embroiled in a relegation scrap that sees them just two points above the bottom three, travel to Manchester for Ryan Giggs' first game in charge of United.

The presence of Giggs – who has replaced the sacked David Moyes on a temporary basis – is sure to create a positive mood inside the ground.

But Adams refused to dwell on the timing of United's decision ahead of the match, instead preferring to focus on ways his side can spoil the party.

Adams said on Thursday: "It is what it is. It's as simple as that.

"We're playing a good team, with good players, that have probably not done as well as they would have liked this season, hence (the news) this week.

"We'll be going there with a game plan and (thinking) how we can cause them a problem.

"The crowd will be up for it, that's for sure. We can imagine how it is going to be.

"Ryan Giggs has been a huge fan's favourite at Manchester United. He's one of the best players the club has ever had. Naturally there's going to be a reaction to that.

"(But) we're going to Old Trafford thinking of ways of how to hurt Manchester United."

Adams says the club's preparations have been no different this week and has called on his squad to step up for the big occasion.

Norwich have lost their last four matches and with clashes against Chelsea and Arsenal to follow, would dearly love a positive result at United.

"We'll be ready…the focus we've had this week has been exactly the same as always," he added.

"What I've insisted on is hard work and 100 per cent effort. This is what we have to do in the situation we're in.

"It's a time for big characters and big people who realise the situation we're in and what's required."

Adams also revealed that Joseph Yobo would miss with a calf problem, but that midfielder Elliott Bennett would be in his matchday squad.

Bennett has not featured for Norwich since the opening day of the season after suffering a serious knee injury.