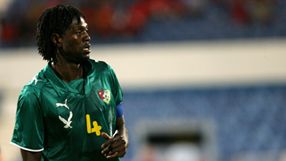 "Adebayor was received yesterday in Accra by the head of state," Cleo Petchezi, director of communications for the presidency, told Reuters.

"Discussions continued this morning in Lome. Following them Adebayor has said he will return to his club and join the national team in a week."

The Tottenham Hotspur striker had previously said he was boycotting the tournament in South Africa, which starts on January 19, because of a row over bonuses for the players.

The developments open the likelihood that Adebayor will play for his club in the Premier League away against Queens Park Rangers on Saturday before joining his teammates one week ahead of the tournament kick-off.

Adebayor, who has now made three returns after self-imposed 'retirements' from the national side, has missed Togo's pre-tournament preparations, including international warm-up games in Oman and Niger over the last 10 days.

The 28-year-old is at the centre of yet another row over bonus payments to the squad following their qualification to the finals.

The Togolese side has been in constant turmoil over money with Adebayor using his status in the small West African country to force the issue.

On Tuesday, Togo press reports said coach Didier Six was also seeking to be paid outstanding wages and had not joined up with the team, who are preparing for the tournament in neighbouring Ghana.

The absence of the French-born coach from the team training camp in Accra was confirmed by Herve Agbodan, communications officer of the Togolese Football Federation (TFF), but he said Six would return to work on Wednesday.

Agbodan told Reuters on Tuesday the dispute over money was not being handled by the TFF but instead by the government.

The state has stepped in before to pay money over to the team, notably ahead of the 2006 World Cup in Germany when Adebayor and team mates refused to train for several days before receiving promised qualification bonuses.

Togo's opening game at the Nations Cup is in Rustenburg against the tournament favourites Ivory Coast on January 22.