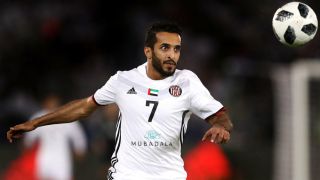 Ali Mabkhout struck deep into stoppage time as Al Jazira secured a place in the last 16 of the AFC Champions League with a dramatic 3-2 victory at Al Gharafa.

Midfielder Assim Madibo was sent off for the hosts just before Al Jazira claimed all three points in the fourth added minute, Mabkhout rounding the goalkeeper to slot in the decisive fifth goal of a see-saw contest.

Al Gharafa now sit three points behind their opponents in Group A but cannot qualify due to the head-to-head record between the teams.

Saudi Arabia's Al Ahli sit top of the table, however, with a routine 2-0 result at home to Tractorsazi Tabriz sending them through to the knockout stages for a second successive season.

Al Duhail maintained their 100 per cent record in Group B, Ismail Mohammad scoring with six minutes remaining to clinch a 1-0 win away at Zob Ahan.

The defeat was a blow to the hosts, who now face a winner-takes-all showdown against PFC Lokomotiv - who thrashed Al Wahda 4-1 in Abu Dhabi - to decide who will finish second behind the runaway winners.

In Group G, Guangzhou Evergrande remain top of the table despite conceding a late equaliser to draw 1-1 with Buriram United.

Fabio Cannavaro's side dominated throughout but failed to build on Zheng Long's 20th-minute strike, allowing the hosts to grab an unlikely point when Yoo Jun-su fired home in the second minute of additional time.

Still, the two-time champions hold a one-point lead over Cerezo Osaka, who defeated Jeju United 2-1 thanks to goals from Eiichi Katayama and Yoichiro Kakitani.

The Japanese side travel to Guangzhou in the final round of group games, while Buriram - who have six points to their name - take on eliminated Jeju knowing they must win to stand a chance of progressing in the tournament.

Group G standings after Matchday 5! Which two teams will progress to the knockout rounds? April 3, 2018

Kashima Antlers booked their place in the last 16 courtesy of a 2-2 draw against Group H strugglers Shanghai Shenhua.

However, the other qualifying spot is still up for grabs after Sydney FC kept their hopes alive with an impressive 4-1 win away at Suwon Bluewings.