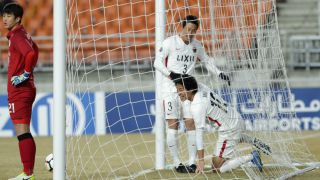 The visitors forged ahead in the eighth minute as Kanazaki slotted home from Yasushi Endo's sensational first-time pass, but Suwon wasted a golden chance to level as Leo Silva fouled Waguininho in the box only for Dejan Damjanovic to see his weak spot-kick saved by Kwoun Sun-tae.

Kanazaki had his second shortly before the hour, heading in on the line after Yuma Suzuki had nodded across the face of goal, and Cristovam's 89th-minute strike through the legs of Kwoun was scant consolation.

Kashima have four points from two matches while Suwon have three with Shanghai Shenhua and Sydney FC on two and one respectively following their 2-2 draw.

Shanghai took the lead midway through the first half as the experienced Obafemi Martins bundled home at the front post from Li Yunqiu's low cross, but within eight minutes Sydney had turned it around.

Luke Wilkshire converted the rebound after Li Shuai saved Bobo's header and Milos Ninkovic showed fine footwork to tee up Alex Brosque, who smashed high into the roof of the net.

The hosts were level before the break, however, as Andrew Redmayne punched Bai Jiajun's cross to the edge of the area, where Fredy Guarin cushioned a calm volley beyond the despairing dive of the scrambling goalkeeper.

The other fixture in that group, between Cerezo Osaka and two-time champions Guangzhou Evergrande, ended 0-0.