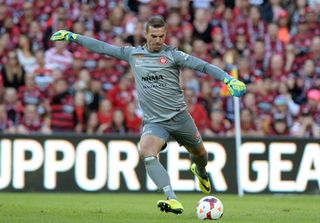 In their maiden campaign in the Asian competition, the Wanderers have impressed and eliminated defending champions Guangzhou Evergrande in the last eight.

"To play a semi-final of the Champions League, it doesn't get much bigger," he told the club's website before they left for Seoul.

"We're really looking forward to it, we've got a chance to go to the final and then go even further than that.

"There's so much dangling there in front of us to achieve and a moment that a lot of us are going to look back and think 'wow, that was a big game, a big moment' and we've just got to make sure it's not the last two games."

Choi Yong-soo's Seoul are in decent form ahead of the clash, unbeaten in 10 matches in all competitions.

The K. League outfit are particularly hard to break down, much like their Australian opponents.

Seoul, two-time runners-up in Asia including last year, are flying with five wins in their past six.

Choi has rotated his squad with an eye on the Champions League, but he has strength in depth which makes Seoul hard to beat.

The tactical battle between Choi and Popovic will be intriguing, particularly with both teams liking to play on the counter-attack.

Both sides are also strong defensively, with Seoul having conceded just 19 times in 26 league matches this season.

Seoul needed penalties to overcome the Pohang Steelers in the quarter-finals after their tie finished 0-0.

It could tempt Popovic into a more attacking approach in South Korea.

However, the A-League side are without suspended striker Tomi Juric, who scored both of the Wanderers' goals in their shock quarter-final defeat of Evergrande.

Seoul are likely to need to be carrying a win to Sydney for the second leg, and the onus will be on them to dictate at home.