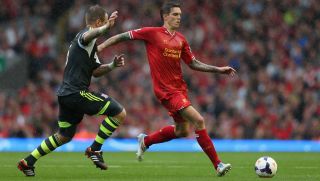 The Denmark international captain, who joined the Premier League club from Brondby in January 2006, has consistently been linked with a switch to La Liga champions Barcelona in recent transfer windows.

While admitting an offer was on the table for him to leave Liverpool in the last close-season, the 28-year-old has insisted he is content to remain on Merseyside for the remainder of his current deal.

However, Agger - who has been on the bench for Liverpool’s last two games following a rib injury - wants to win trophies and refused to deny he may leave in the future.

"(The decision to reject Barcelona) was up to the club. The club would not sell me, and it was so. We can always talk about (that) again later," he told Ekstrabladet.

"I do not know (If I will leave Liverpool), right now I have two-and-a-half years left on my contract and I intend to fulfil my contract.

"I'm glad at Liverpool and playing well. We have a great team, and if I can win something it will be great. Liverpool is a huge club."