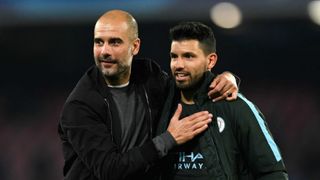 Sergio Aguero has reaffirmed his intention to stay at Manchester City, while declaring his relationship with manager Pep Guardiola to be "really good".

Aguero hit 21 Premier League goals, the most by a City player during the 2017-18 campaign, as Guardiola's men romped to the title by a huge 19-point margin from rivals Manchester United.

But Aguero has endured spells out of the side during Guardiola's two years in charge, with the Catalan appearing to prefer Brazil international Gabriel Jesus as the figurehead of his attack.

The Argentina striker is preparing for the World Cup but shrugged off speculation he could leave City for Real Madrid or former side Atletico Madrid during the transfer window.

"It is really good, we were very clear when we saw each other," Aguero said of his relationship with Guardiola during an interview on El Chiringuito de Jugones.

"I try to do my job and he does his job. Obviously, he is always fine with me. I am happy how the season ended.

"I think every year [there are rumours] … maybe, a few more rumours this year with Atletico. With Madrid as well, since I left Atletico, it sounds like Madrid, Madrid, Madrid. Well, I'm a City player.

"But it is always good that other teams are interested. What I have to do right now is to be focused on the World Cup, and after that, focused on City."