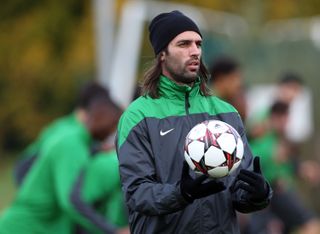 The sides meet as the bottom two in Group H, both facing the unenviable task of trying to force their way into a top two currently comprising Barcelona and AC Milan.

And former Rangers player De Boer knows his defence will need to be on form to cope with Greek striker Samaras.

"Samaras is one of their key players with his strength and height," he said.

"If Celtic can't build the play from the back, the first option will be to go to Samaras, then fight for the second ball. He's so strong, it's impossible to beat him to the first header.

"Of course, we would prefer to win. If we want the potential to finish in second then the best thing is to win. That might also put us in a good position for third place.

"To lose is the worst option but a draw could maybe be enough."

De Boer's comments come despite Samaras' relatively poor goalscoring form this season. The 28-year-old is yet to score in the UEFA Champions League and has only netted three times in the Scottish Premiership - all in one match at Kilmarnock in September.