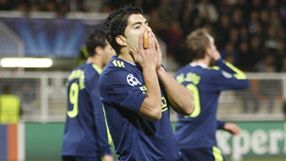 Alkmaar dominated the match against Martin Jol's team and were rewarded for their performance 16 minutes before time when Pontus Wernbloom headed a home a cross from Ragnar Klavan.

Kolbeinn Sigthorsson doubled the lead three minutes later, also with a header, before Ajax's Andre Ooijer was sent off a minute before time.

PSV, 4-2 winners on Saturday against Excelsior Rotterdam, are top with 33 points after 14 matches, two more then Twente Enschede who suffered their first league defeat, losing 2-1 at NAC Breda.

Ajax remain third on 27 points and host leaders PSV next Saturday. Alkmaar are fifth with 25 points.

Fourth-placed Groningen wasted the opportunity to move into third, losing 3-0 at Heracles Almelo, who had Samuel Armenteros on target four minutes before the interval for the opening goal. Everton and Mark Looms sealed the victory with second-half goals.

Teenager Jerson Cabral curled in a long drive nine minutes before time to salvage a 2-2 draw for Feyenoord at home against Heerenveen.

Luc Castaignos had scored for struggling Feyenoord, 14th with 13 points, after 11 minutes by netting a rebound but Mika Vayrynen and Viktor Elm turned the tide for the visitors.