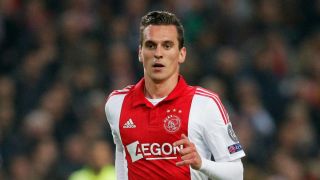 Ajax have attempted to ward off interest in Arkadiusz Milik by announcing the striker will not be leaving the club in this transfer window.

Milik turned in a series of impressive performances for Poland in their run to the quarter-finals of Euro 2016 and has been linked with the likes of Juventus, Roma, Inter and AC Milan.

But the Amsterdammers insist the 22-year-old will remain with the Eredivisie giants next season.

A club statement read: "Ajax and Arkadiusz Milik have agreed the striker will not leave the club this transfer window. Ajax head coach Peter Bosz is keen to keep last season's top scorer at the club.

"Ajax sporting director Marc Overmars has been in touch with Milik and his management in recent days. The Poland international has a contract with Ajax until July 2019, but has caught the attention of a number of clubs.

"Milik, who is still away on holiday after Euro 2016, will return to Amsterdam on July 22."

Milik joined Ajax on loan from Bayer Leverkusen in May 2014, before making the move permanent the following summer.