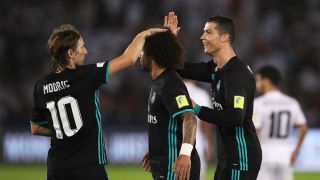 Gareth Bale came off the bench to score a late winner as Real Madrid avoided embarrassment in a 2-1 victory over Al Jazira in the Club World Cup semi-finals.

Bale, making just his second appearance since September, found the net with his first touch on a frustrating outing for Madrid, who dominated possession but struggled to find a way through.

An inspired display by Al Jazira goalkeeper Ali Khaseifa thwarted the European champions early on before Romarinho fired the Emirati outfit into an unlikely lead.

Real Madrid had seen two goals disallowed in the first half and Al Jazira were themselves denied by VAR early in the second, with Mbark Boussoufa having an effort chalked off for offside.

Khaseif’s withdrawal through injury after 51 minutes sparked the beginning of the Madrid revival, with Ronaldo becoming the competition's all-time top scorer with his sixth Club World Cup goal before Bale completed the turnaround in the 81st minute.

Madrid will now face Gremio in the final in Abu Dhabi on Saturday.

1 - Gareth Bale has scored with his first shot and his first touch of the game against Al Jazira. Impact. December 13, 2017