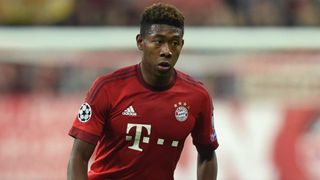 David Alaba says he is in no rush to open contract renewal talks with Bayern Munich.

Thomas Muller, Jerome Boateng and Javi Martinez all signed new long-term deals with the reigning Bundesliga champions in December and Bayern are believed to be keen on extending Alaba's stay at the club as well.

However, the Austria international claimed he is not thinking about his long-term future and has even suggested he could leave Bayern at some point in the future.

"I was injured for a quite a long time, so I was only thinking about my recovery. Contract talks were never on my mind.

"Could I stay at Bayern my entire career? I'm not the type of person who looks that far ahead. I am setting short-term goals instead. A move to England? I understand why a lot of players are moving there. It's one of the best leagues in the world. But the same goes for the Bundesliga.

"I am not missing anything at Bayern. Everybody who has ever played for Bayern knows how good this club is for its players. We are all grateful to be playing for Bayern. Munich is a great place for me."

The 23-year-old has featured in a number of positions throughout his Bayern career, but he has made it clear that he prefers to play in midfield, where he regularly starts for his national team.

"I have shown that I can play as a centre-back, but it's not necessarily my favourite position," he added.

"I am feeling more at home at left-back or in midfield. But I want to help the team regardless of where the coach uses me.

"Of course, I would like to become the best midfielder in the world. Every player wants to become one of the best. I see my future in midfield, that's no secret. But I can play in a number of positions."