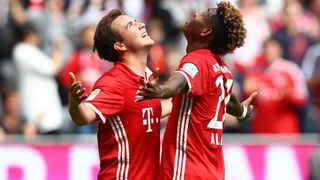 Gotze, 24, returned to Dortmund after spending three seasons with Bayern, winning the Bundesliga in each campaign.

Alaba was disappointed to see the attacker leave in a deal reportedly worth £22million.

"For me it’s kind of sad, because I got along with him pretty well. Even off the pitch," he said after a 3-0 friendly win over Landshut.

"But he made his decision and I wish him all the best."

Alaba said he was wary of what Dortmund were capable of during the upcoming campaign.

"The beginning of every season isn’t easy, especially with Dortmund in our league," he said.

"They want to give us a hard time of course, but we want to compete."

Bayern attacker Franck Ribery, however, is less fazed and knows the quality within Carlo Ancelotti's squad.

"Dortmund is a good team. It’s always difficult, but it doesn’t matter. We have to concentrate because we have a good team as well," he said.

"We are still waiting for some players to come back from vacation. That’s important."