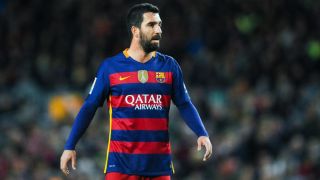 Jordi Alba and Arda Turan have both been passed fit for Barcelona's crucial La Liga clash at home to Atletico Madrid on Saturday.

Spain international Alba suffered a hamstring injury in the 6-0 thrashing of Athletic Bilbao on January 17 and has missed Barca's last three matches, while Turan sat out the Copa del Rey victory over Ernesto Valverde's side on Wednesday due to illness.

But the Liga leaders have confirmed the duo came through training unscathed and are available to face Diego Simeone's side at Camp Nou.

"Jordi Alba has been given medical clearance and is included in the list of 18 [players in the matchday squad], as is Arda Turan, who missed the last game with flu but is now back to full health and ready to take on his former club," a club statement confirmed.

Turan missed the reverse fixture at the Vicente Calderon due to Barca's ban on registering new signings, which kept him out of action until this month.

Barca will move three points clear of Atletico in table, having played a game less, with a victory.