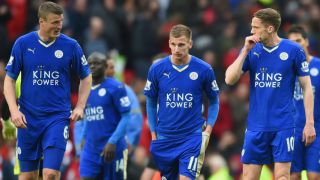 Following Leicester's 1-1 draw at Manchester United on Sunday, anything other than a Spurs victory at Stamford Bridge will see Claudio Ranieri's men crowned champions with two games to spare.

Ranieri himself will be on a flight from Italy and is unable to watch the match that could seal a stunning success for the pre-season relegation candidates, but Albrighton says the playing squad will gather to cheer on last season's champions Chelsea.

"We have got to watch it - I don't think we can ignore this one," he told Sky Sports.

"I didn't watch last week but when there is a chance to win the league, like this week, we have all got to watch it and I think we will probably spend the night all together."

Albrighton, 26, is one of three players - captain Wes Morgan and goalkeeper Kasper Schmeichel being the others - to have appeared in all 36 of Leicester's games this season.

Despite missing their first chance to wrap up the title at Old Trafford, the winger does not think there is any frustration in the camp.

He added: "I wouldn't say we were dejected. We came to win the game and to wrap up the title, but it wasn't to be.

"We were probably thinking what could have been and that we could have been over there celebrating with our fans, but we have still got another couple of chances to do that and hopefully we can."