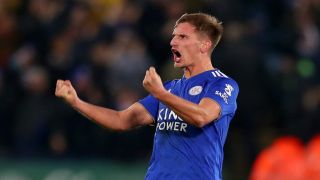 The winger, who helped the Foxes to their incredible title triumph in 2015-16, will stay with the club until 2022, the Foxes confirmed on Friday.

Albrighton, 29, said he had no doubts about renewing his commitment to Leicester, for whom he scored their first Champions League goal.

"It was totally straightforward," he told the club's website. "Leicester offered me a deal and I was always going to sign it. I've had some good times here and hopefully I can continue to do so.

"When I first signed, I looked at the squad that was in the dressing room and the club itself in terms of its fanbase and what sort of club it was.

Albrighton, who joined on a free transfer from Aston Villa in 2014, has made 21 Premier League appearances so far this term, scoring two goals.

Benalouane made 29 appearances for the club in all competitions, including 16 in the Premier League, after joining from Atalanta in August 2015.

The Tunisia international becomes the first signing for former Foxes boss Martin O'Neill after his appointment at the City Ground this week.