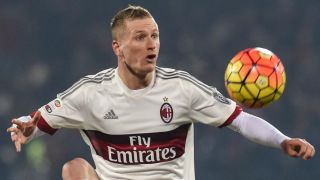 AC Milan will not underestimate the threat posed by Alessandria as the Lega Pro side look to continue their fairy-tale Coppa Italia run by reaching the final, says Ignazio Abate.

Tuesday's semi-final first leg has been moved to Serie A side Torino's Stadio Olimpico, with Alessandria's regular home having a capacity of under 6,000, with the second leg at San Siro not taking place until February 29.

Alessandria, who play in the third tier of Italian football and went bankrupt before reforming as recently as 2003, have enjoyed an astonishing run in this season's competition.

They defeated Serie A sides Palermo and Genoa away from home and then got the better of Serie B team Spezia – who had eliminated Roma – to earn a dream last-four tie against Milan.

Sinisa Mihajlovic's men are unbeaten in four matches, but were frustrated by a 2-2 draw at Empoli on Saturday which saw them lose the lead on two occasions.

Defender Abate admits there is frustration in the camp following the result, but warned his team-mates to be on guard against their lower-league opponents.

He told Milan channel: "This is a draw that leaves us feeling angry, we took the lead twice and we should have brought home three points. An experienced side has to come away with the win and be more ruthless.

"But let's focus on Alessandria, which is a massive match and then we have the derby [against Inter next Sunday] where a win could change everything.

"Alessandria are not to be underestimated. If they have come this far, it means that they are a good side."

For a club of such prestige, Milan have surprisingly only won the Coppa Italia five times in their history and just once since 1977 - when they picked up the trophy in 2003 under Carlo Ancelotti - a record they are desperate to improve on.

Milan have lost in either the quarter-final or semi-final stages for each of the last five seasons, but defender Luca Antonelli is optimistic of reaching the final as long as his team play to their full potential.

He said: "We need to be more ruthless up front but if we play like we know how, we can beat anyone. We now have the cup match with Alessandria and then we will think about the derby.

"We are improving and are pleased about that, but we can do better. Alessandria are a good side and we won't underestimate them. Having said that, if we play like Milan then we will win."

Striker Luiz Adriano is in contention to play after his move to Chinese side Jiangsu Suining fell through, while Mario Balotelli played for the first time in four months against Empoli.