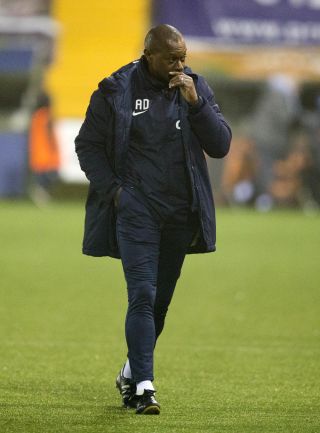 Alex Dyer is not looking at Kilmarnock’s Ladbrokes Premiership clash with Rangers through the prism of the Old Firm title battle.

Just over a year ago the Ayrshire club severely dented the Light Blues’ hopes of wresting the trophy back from Celtic with a 2-1 win at Rugby Park, with the Hoops ultimately going on to make it eight in a row.

Rangers go into the game on Wednesday night trailing the champions by seven points and although they have a game in hand, a defeat would be hugely damaging.

But that is of no concern to the Kilmarnock boss, whose side are in seventh place, one point behind Hibernian.

“They are like everyone else, they can’t afford to drop points and neither can we,” said Dyer.

“It’s not just about Rangers and Celtic, it’s about Kilmarnock and we want to win football matches just like they do.

“I just think about us, winning the games and what’s good for us.

“If we win the game then that takes it where it takes it but the most important thing is about us.

“I look at the opposition, look at their strengths and weaknesses and we work on that and we look at ourselves and see how we can hurt them.

“I treat every game the same, just because it’s Rangers or Celtic, I won’t treat them differently.”

A report claimed Kilmarnock have opened contract talks with Scotland star Eamonn Brophy, who has 18 months of his current deal to run, and have also made an extension offer to fellow Scotland cap Stephen O’Donnell, whose contract ends in the summer.

Dyer will leave any contract talks to James Fowler, head of football operations at Kilmarnock.

“It hasn’t come to me yet. Of course, I would like to see him stay. When he is in the side and playing well we are a better team so obviously you want to keep the best players at the club.

“His (O’Donnell) contract ends at the end of the season. Obviously he is another good footballer we want to keep at the club.

“We just have to play that by ear, he might want to make his contract run to the end. It is his right to do what he wants to do.”