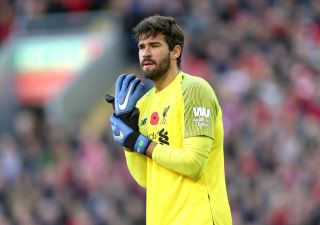 Liverpool goalkeeper Alisson Becker insists he cannot be compared to Bayern Munich counterpart Manuel Neuer when it comes to being among the world’s best.

The pair face each other in the Champions League last 16 second leg at the Allianz Arena with the tie goalless after the meeting at Anfield.

Brazil number one Alisson has kept 17 clean sheets in 30 Premier League matches this season and leads the race for the golden glove by three from compatriot Ederson, of title rivals Manchester City.

But despite an impressive start to his Liverpool career after last summer’s £65million move from Roma, Alisson believes he still has some way to go.

“I can’t compare myself with Neuer,” he said.

“He is one of the best in the last 10 years, maybe he is the best one. He has won everything and I’m just starting.

“He is a reference for me and is a great guy as well. I have played against him, playing against him is a dream come true.

“I don’t think I can compare myself with him.”

Of his own form since arriving in England the Brazilian added: “This is a consequence of what we do on the pitch.

“On the training ground every day I will work hard. I know I have to work hard, I am part of a big club who have big plans and have big goals.

“I need to take this responsibility and take care of it. For this I need to give my best, 100 per cent on the pitch.

“To be the best in the world would be a consequence of this.”