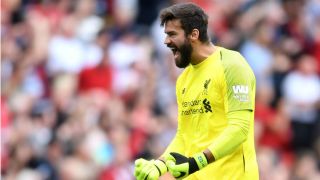 Liverpool goalkeeper Alisson believes a "big challenge" awaits his team against Napoli in the Champions League.

Jurgen Klopp's men make the trip to the Stadio San Paolo on Wednesday, looking to make it two wins from as many games in Group C.

Alisson's last visit to Napoli was a successful one, the goalkeeper helping Roma to a 4-2 win in Serie A in March.

The Brazil international remembers that encounter and said Liverpool would face a huge test against Carlo Ancelotti's side.

"They had 24 attempts on goal, 13 on target. I made 11 saves and conceded two goals," Alisson told the club's website.

"It's always tough playing away against a great club. In Napoli, we'll definitely find really passionate fans, and a team that comes onto the pitch with a huge desire to win.

"The last and only time I played there, we happily got a win, but it was one of the games I had to work hardest in during the season.

"It was one of the toughest games of the season for us in Serie A, so it's definitely going to be a tough game. They've had the same basis of the team for three to four years.

"I hope we have a great game and achieve the victory, but it'll definitely be a big challenge for us."

Alisson said that victory had boosted his team, but warned they needed to deliver again.

"We're confident in our potential," he said. "To beat a great team like PSG fills you with confidence, but it'll be a different game so we have to look at it differently as well, bringing our desire onto the pitch, doing everything that we've been doing up until now at the start of the season.

"On the pitch, we play as a team. Playing as a team not as individuals, that's our main quality.

"Our strength isn't in one player - it's in all the players running together and being dedicated together on the pitch to always represent and lift up the name of Liverpool."