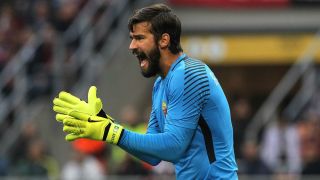 Brazil and Roma goalkeeper Alisson hopes his club future is decided before the start of the World Cup.

Alisson, 25, has been linked to the likes of Real Madrid and Liverpool, as well as Chelsea.

The shot-stopper, who is contracted until 2021, believes his future will be known before the showpiece event begins in Russia.

"I believe and I hope that everything will be resolved before the start of the World Cup," Alisson said after Brazil's 3-0 friendly win over Austria on Sunday.

"To be honest, I left everything in the hands of my agents.

"If it's not resolved before the World Cup, then it will be discussed after it because my head will be focused only on Brazil [during the tournament]."

Alisson would not be drawn into potential destinations, saying Roma would also be respected.

"There are possibilities on which we are working, but always together with Roma and with respect to my club," he said.

"We will see what will happen this week."