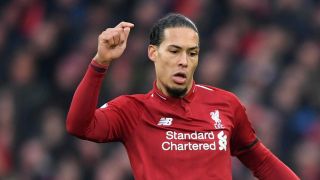 Alisson believes Liverpool will not feel the absence of Virgil van Dijk when they host Bayern Munich in the Champions League.

Van Dijk will be serving a one-game ban for Tuesday's first leg of the last-16 tie at Anfield, with Jurgen Klopp facing defensive selection issues.

Joe Gomez has been ruled out and Klopp has indicated Croatia defender Dejan Lovren is not expected to recover from a hamstring injury in time.

Liverpool's options without the world's most expensive defender Van Dijk are therefore limited, although Fabinho has filled in at centre-back and could partner Joel Matip at the back.

Van Dijk has completed the full 90 minutes in all 26 of Liverpool's Premier League games this term, playing a huge part in Klopp's men sitting level on points with Manchester City at the top of the table.

But Alisson is confident whoever former Borussia Dortmund boss Klopp picks to take Van Dijk's place in the heart of the Liverpool defence against the Bundesliga champions will do a good job.

"All the defenders have played so when one comes in and one leaves, we don't feel that loss because we're all used to each other," the Brazil goalkeeper said to Premier League Productions.

"That the backline are all able to communicate with each other, and know each other really well, is vital for any team. Once you've cracked it, you've got it – and we seem confident."

Manuel Neuer is expected to line up in goal for Bayern after the club captain returned from three games out with a thumb injury in Friday's league win at Augsburg.

And Alisson is relishing the chance to show what he can do against the Germany goalkeeper, who is widely regarded among the best in the world in his position.

"We know they’re a really good, strong team," he added. "Jurgen knows more about that team than anyone. There's a lot of quality – and a great defence.

"[Neuer] is a big reference for me. When we got them in the draw I was pleased knowing I'd be against him."