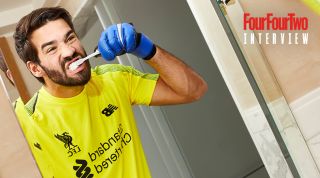 Alisson has told FourFourTwo that he signed for Liverpool last summer because he wanted to be a part of their proud European history.

The Brazilian enjoyed a stellar season with Roma in 2017/18, keeping 22 clean sheets as the Giallorossi finished 3rd in Serie A and reached the European Cup semi-finals for the first time since 1984, before losing 7-6 on aggregate to Liverpool.

Two calamity blunders by custodian Loris Karius resulted in the Reds suffering final heartache against holders Real Madrid, and the Merseysiders wasted little time in recruiting a top-class replacement to mount a title challenge in 2018/19.

Alisson became the most expensive goalkeeper ever at £67 million until Chelsea bought Athletic Bilbao’s Kepa Arrizabalaga for £71.6m a month later, although the Blues had also eyed him as a replacement for Real Madrid-bound Thibaut Courtois.

However, the Brazilian says uncertainty over Chelsea’s managerial situation, and the fact they hadn’t qualified for the Champions League, made it an easy decision.

Speaking exclusively in the February 2019 issue of FourFourTwo, out Wednesday, Alisson says: “I chose Liverpool for the same reasons I went to Roma when I first left Brazil – I thought this would be the best move for my career.

“Chelsea were changing their manager and not playing in the Champions League. I’ve also always admired Liverpool’s history. This is a club with five European Cups in their trophy cabinet. I really wanted to be part of that history.

“I came very close to winning the competition with Roma and I’m working hard to make it happen now with Liverpool. What’s life if not fighting for your dreams? I dream of winning the Champions League.”

Read the full interview with Alisson in the February 2019 issue of FourFourTwo. A goalkeepers special, we also speak exclusively to Gianluigi Buffon, Jan Oblak, Jordan Pickford, Dino Zoff, Claudio Taffarel and Jan Tomaszewski. Plus, we hear from Helmuth Duckadam on his penalty-saving heroics for Steaua Bucharest in the 1986 European Cup Final, meet 92-year-old River Plate legend and goalkeeping pioneer Amadeo Carrizo, and trawl the history books to find the maddest of the mad.