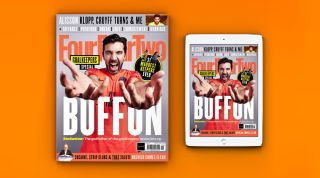 Watching Gigi Buffon daintily sipping from a doll's tea set is definitely up there with one of the best (and most surreal) moments in FourFourTwo history, but the Italian World Cup winner was more than happy to play along as we riffed on the idea of him being a giant of the game.

Elsewhere, former Aston Villa custodian Mark Bosnich comes clean about cocaine, strip clubs and that salute in a frank and honest One-on-One, Helmuth Duckadam tells us about the time he saved four Barcelona penalties to win the European Cup for Steaua Bucharest, and the Scorpion King, Original Pie-eater and Holy Goalie all pop up in our search for the maddest of the mad.

Pick up a copy from Wednesday! You'd have to be mad to miss out...

So who better to front our goalkeepers issue than Superman himself? Gigi opens up about the perils of social media and being the last of the ‘proper’ stoppers. Legends don't come much bigger.

You might not recognise the face but you should know the name. Jan Oblak’s numbers for Atletico Madrid are so good they can look like a typo – in his opening 125 La Liga games, the giant Slovenian kept 73 clean sheets. No wonder the world’s top clubs are watching. We chat to find out what makes him tick...

Jordan Pickford isn’t lacking in confidence – that’s why he wasn’t perturbed when his England pals teased his north-eastern dialect. Or when his country needed him to end their penalty hoodoo. Yes!

His career should have taken off after his heroics denied Barcelona in 1986. But with rumours lingering of a violent intervention by Romania’s communist rulers, Duckadam disappeared from view. The man himself reveals what happened next.

Now 92, the River Plate icon was South America’s original bonkers goalkeeper, inspiring everyone from Higuita to Chilavert – though not everyone was impressed with his showboating.

‘You don’t have to be crazy to be a keeper, but it helps.’ Well, the former may be true, but going by this weapon-hoarding, art-loving, meat-stealing bunch, the latter is less obvious...

The former Aston Villa keeper reveals if Fergie ever gave him the hairdryer, if it was really a ‘Basil Fawlty impression’ against Spurs, and how he ended up getting hooked on cocaine.

Arsenal caused a stir when they replaced Billy Wright with physio Bertie Mee in 1966, so how did he go from medicine man to legendary Gunners gaffer? Plus, we learn the bizarre history of Bristol Rovers, remember Rotherham’s former home, and showcase some classic Everton programmes.