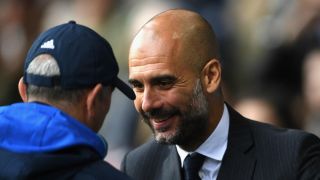 Tony Pulis believes Pep Guardiola will prove to be a success given time at Manchester City.

Pulis' West Brom visit the Etihad Stadium on Tuesday, where victory will all but secure a place in the top four for Guardiola's men.

Champions League qualification is all City have left to play for at the end of an uneven first season in charge for the former Barcelona and Bayern Munich boss, who will finish a campaign without a trophy for the first time in his career.

The departure of long-serving City right-back Pablo Zabaleta was confirmed over the weekend and, with a close-season of upheaval among his playing staff expected, Pulis insists Guardiola must be allowed to shape the squad to his needs.

"The club can expect what it wants but it takes time for a manager to settle in and get what he wants," he told a pre-match news conference.

"It's the same if you look at [Jose] Mourinho's situation at Manchester United. Jose will improve that team again next year so they'll be a stronger team and be a real powerhouse again next year.

"Liverpool are almost guaranteed Champions League, they will spend again. That group are just revving up to take off again."

Tony Pulis has been nominated for Manager of the Season!You can vote for the gaffer below...May 15, 2017

Guardiola's plight compares somewhat unfavourably to Antonio Conte, who secured the Premier League title in his first season in England when Chelsea won 1-0 at West Brom last Friday, while the Blues also have an FA Cup final to look forward to.

"Every club is run differently and every club that you pick up is in a different state," said Pulis, who has been nominated alongside Conte on Monday on a shortlist of six for the Premier League's Manager of the Season award.

"It's very difficult to say just because of results based on one season. The two lads we're talking about, I've found them smashing people – really good football people, down to earth, genuine.

"They've done fantastically well in their careers and I'm sure Pep will be determined to be closer than he's been this year in all the competitions."