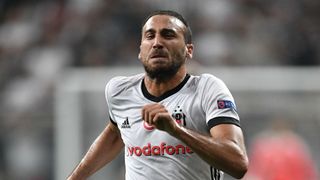 Sam Allardyce expects to discover within the next 24 hours if Everton's bid for Besiktas striker Cenk Tosun has been accepted.

Everton are believed to be ready to stump up £25million to sign Turkey international Tosun, but reports suggest the Istanbul club have upped their asking price.

Following a 2-0 defeat to Manchester United at Goodison Park on Monday, the Toffees are winless in four Premier League matches and have only scored once during that run.

Allardyce expects an answer to their bid on Tuesday and hopes Tosun - or any other forward they may sign - can make a significant contribution in front of goal.

"We've done all we can, so I would presume we'll know in the next 24 hours if it's been successful or not," said Allardyce.

"Obviously, we need a bigger goal-scoring threat than we have at the moment and that may help us in so many ways to achieve better results.

Asked if there was an issue regarding the fee for Tosun, Allardyce responded: "Not that I know of. Our deal is in, our deal is there and it's up to them whether they accept our deal or not."