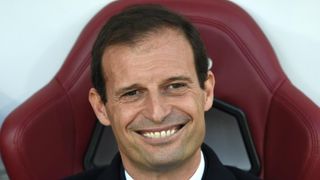 Massimiliano Allegri complained that Juventus were "immature" in aspects of their play despite extending their unbeaten run to 20 Serie A matches with a 4-1 derby victory at Torino.

Paul Pogba's free-kick gave Juve the lead and Sami Khedira - who was sent off for dissent in the closing minutes - made it 2-0 before half-time.

An Andrea Belotti penalty saw Gianluigi Buffon's record run without conceding end at 973 minutes before substitute Alvaro Morata made sure of the points with two well-taken finishes.

However, Allegri felt his team were guilty of poor decision-making.

"It was a fine victory, especially as we managed to put the [Bayern] Munich blow behind us," Allegri told Mediaset Premium and Sky Sport Italia, referring to Juve's extra-time Champions League exit in midweek.

"It's just a shame we went for too many solo moves and dribbles when Torino were struggling.

"We need to improve in that sense, as we are still too immature and think the situation is easy."

Torino coach Giampiero Ventura was left fuming by referee Nicola Rizzoli's decisions after Maxi Lopez crucially had a goal chalked off for offside when the score was 2-1.

"It hurts to lose a derby like this," he said. "Alex Sandro should've been sent off, the same goes for Leonardo Bonucci, and in the second half we should've been at 2-2 with an extra man.

"With all due respect for Juventus, an extraordinary team, but today I will not accept this situation. I won't stand for it.

"The incidents were so incredibly obvious that I have to wonder how on earth the referee didn't see them? How is it possible that all this can happen?"

But Allegri did not think the referee had an impact on his side's win, which keeps them on track for a fifth successive Serie A title.

"I understand they were upset, as we were after Wednesday in the Champions League," the Juventus coach said.

"I never usually talk about referees and I think two incidents do not take away from the good things we did in this game.

"After the Maxi Lopez goal we continued playing and Torino sat back to wait, so it didn't really change anything."