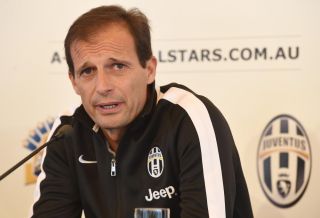 And the 47-year-old believes it is important to have various tactical options.

"The tour has been used to do some good work - we trained hard and well. We grew in a physical aspect," Allegri told Gazzetta dello Sport.

"And then we carried forth the 3-5-2 system whilst also deepening our knowledge of another playing system. I think it is very fortunate to be able to switch between two formations, even in the same game.

"There are moments in the season where you can play with three [defenders] and others when it is better to do so with four. We need to work hard to acquire the knowledge to make it possible to use a different formation with the same reliability."

Juventus have been tipped to bring in defensive reinforcements ahead of the season opener at Chievo on August 30, as Andrea Barzagli will miss the start of the campaign with a foot injury, while Giorgio Chiellini is banned for the first two matches of the campaign.

However, Allegri warned that there can be no room for error in the transfer market.

"We must make evaluations with the club," he added. "We have little time and the margin for error is small. Two mistakes from eight signings is something no-one will notice.

"Two mistakes from two is colossal damage. It's not good even at 50 per cent, for one error from the two."