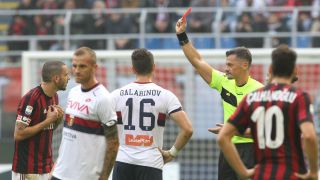 Massimiliano Allegri says it will be a shame not to come up against Leonardo Bonucci as the former Juventus man serves a suspension during the Bianconeri's trip to AC Milan.

Bonucci was the headline capture in a major overhaul at the Rossoneri in the off-season, the Italy defender having reportedly fallen out with Allegri last season to precipitate his departure from the Turin giants.

Juve have already conceded more than a third of the goals they let in last season after 10 games without their former lynchpin.

However, a dismissal against Genoa last weekend forced Bonucci to sit out Milan's 4-1 win at Chievo in midweek and will sideline him again at San Siro on Saturday.

"It's a shame that there will not be Bonucci tomorrow, it's nice to meet in matches like this." October 27, 2017

"One of Barzagli and Rugani will play alongside Chiellini tomorrow. I'm sorry that Bonucci can't play," Allegri told a news conference.

"For seven years he was so important here, it's nice to meet again in matches like this."

Juventus have struggled for consistency this term and lost their long unbeaten home record when Lazio stunned the Allianz Stadium earlier this month.

The champions are two points adrift of early pace-setters Napoli, but Allegri sees positive signs that a seventh consecutive Scudetto could be on the cards.

"We don't have a full stomach. Our numbers are better than they were at this point last season, plus we have more points," he added.

"Napoli are doing extraordinary things. At the moment, the difference between us and them are two missed penalties.

"The title race will end on the final day this season. There will be three direct clashes in the last five rounds, which will decide the title."