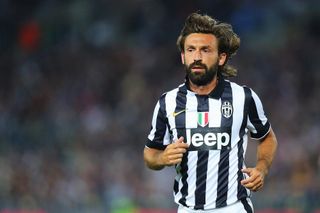 The game in Turin sees Italy's top two go head to head, with both sides boasting 100 per cent league records after five matches.

Pirlo is yet to feature this season after picking up a hamstring injury, but the experienced midfielder could be in line for a return at Juventus Stadium.

"We'll make a decision on Pirlo," Allegri said in a press conference on Saturday.

"It's best to have him in the best shape for Juventus."

Allegri also confirmed that Martin Caceres and Alvaro Morata will be available and the Juve coach revealed he is facing a selection dilemma between Patrice Evra and Kwadwo Asamoah.

The game has come too soon for Andrea Barzagli, who is yet to fully recover from a foot problem.

After a strong start to the 2013-14 campaign, Roma's title challenge fell away last season as Juve romped to a third successive crown.

And Allegri is wary of the threat posed by Rudi Garcia's men.

"Roma are a team who have bolstered during the summer and gained confidence from last season," he said.

"We need to show we've got the desire to regain our title. It won't be easy. Roma approach the game on a great run of form. Juventus Stadium is a crucial factor for us, the fans never stop cheering on the team.

"I think Roma will approach the game completely differently to how they did last season.

"We're aware of our strength and Roma are our closest rival. But nothing will be decided [on Sunday], there's still a long way to go.

"It will be evenly matched so we'll need to do well to bring out our qualities and strike their weaknesses."