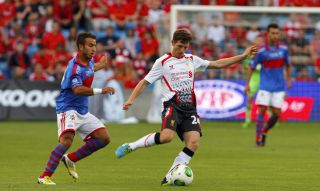 The 23-year-old has not played since suffering a hamstring injury in August's extra-time victory over Notts County in the League Cup, spending more than six weeks on the sidelines.

In his absence, Liverpool have made a strong start to the campaign, losing just once in the league, propelling them into second, two points off leaders Arsenal.

The Wales international was not fit enough to be called up by his country for their upcoming FIFA World Cup qualifiers, but Allen believes that could stand him in good stead when his club side travel to St James' Park next Saturday.

"I'm almost there, basically," he told the club's official website. "The plan is to get back into training, get a good few days leading up to the Newcastle game and hopefully I'll be available for selection from there on.

"It has been a bit of a frustrating time - it always is when you're injured - but I'm finally getting there. It was the one I had in the back of my mind anyway, so it has worked out quite nicely in that sense.

"I was disappointed; I thought I would get back for the Wales games but unfortunately they just came a bit soon. But it has meant that I got a bit of extra rehab leading up to that game. I have been able to get ready.

"With the timing of the injury, I hadn't really got into the swing of things.

"This is a fresh start of the season for me personally. It is great to come back with the team doing so well."