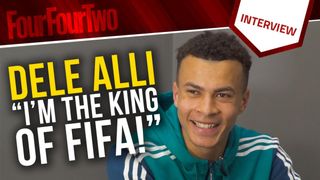 The 19-year-old former MK Dons midfielder has enjoyed a breakthrough season with the Lilywhites in 2015/16, already earning England honours and scoring on his first senior start for the Three Lions against France at Wembley Stadium.

And the talented teenager insists he’s the top dog when Mauricio Pochettino's squad are able to enjoy some downtime in front of a games console.

“Who's the best? Me, definitely,” Alli says as part of an exclusive interview which accompanies the April 2016 issue of FourFourTwo magazine, out now.

“I play as Bayern Munich. Arjen Robben was just unstoppable on FIFA 15 and I’m trying to get as good [on FIFA 16] as I was with him on FIFA 15, but it ain’t happened yet.”

Find out which Spurs player Alli claims isn’t as good at FIFA as he thinks he is in the video below, and read his exclusive interview in the new issue of FourFourTwo.

Want to watch more exclusive interviews with Alli, plus our other April 2016 cover stars Dimitri Payet, Riyad Mahrez and Hector Bellerin? Of course you do! Subscribe to FourFourTwo’s YouTube channel to see them all, and get stuck into our library of Performance videos on how to train, think and play like a pro.