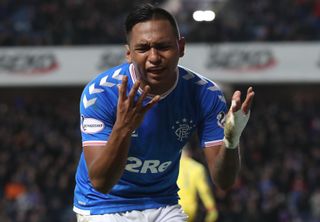 Former Rangers manager Ally McCoist believes Alfredo Morelos has his heart set on a move and Steven Gerrard will have two replacements lined up.

Rangers are understood to have rebuffed an initial approach from Lille amid reports the Colombia striker has agreed personal terms with the French side.

However, the Ligue 1 club have spending power and could yet mount a serious attempt to take the 24-year-old from Ibrox.

McCoist told talkSPORT: “I’ll be very disappointed if he leaves if they don’t get a replacement and get good money for him.

“But listen, if Neil Lennon can say every Celtic player has a price on his head then it’s safe to say every player in Scotland has.”

Rangers’ record goalscorer added: “Morelos has been excellent in terms of his goal return for Rangers, particularly in Europe last year, some of his goals were wonderful.

“(He) still hasn’t scored against Celtic, which is a question mark because Old Firm centre-forwards have got to score against each other, I think it’s very important to do that. But clearly a very talented player.

“The reports about Lille have been going on for a few weeks. I think Steven will accept an offer if it’s the correct offer, as long as he gets cover in. He will have that earmarked in the bigger chance than an off chance that he might leave.

“I think he has set his heart on a move, he eventually wants to play in the Premier League, I think he could probably do that.

“But if Rangers get an acceptable offer then he will be on his way. I think if they get an offer of £12-13million then they will accept it, but I genuinely don’t know.

“He has certainly scored goals and he will score goals wherever he goes.

“But he has got a question against his temperament as well. His disciplinary record hasn’t been good, he has let himself and Steven and his team-mates down on one or two occasions. It has got better, but still not perfect.

“But Steven will have another couple of forwards in mind if the move goes ahead.”