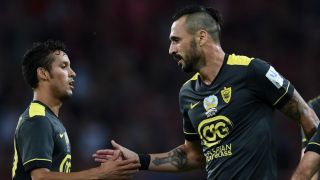 Hannover look set to complete the signing of Hugo Almeida after the Portuguese striker agreed to cancel his contract with Anzhi Makhachkala.

Almeida, 31, moved to Anzhi in July, but, after 14 appearances and four goals, has left the Russian Premier League side amid reports he is due to join up with the Bundesliga strugglers.

Thomas Schaaf - who took over at Hannover in December - worked with Almeida at Werder Bremen before the striker had spells at Besiktas, Cesena and Kuban Krasnodar.

German newspaper Bild reports that Almeida will link up with Hannover following their mid-season training camp in Turkey and finalise terms this week ahead of the Bundesliga restart.

With Schaaf's men 17th in the table and just a point above rock-bottom Hoffenheim, Hannover begin the second half of their campaign at home to Darmstadt in 10 days' time.